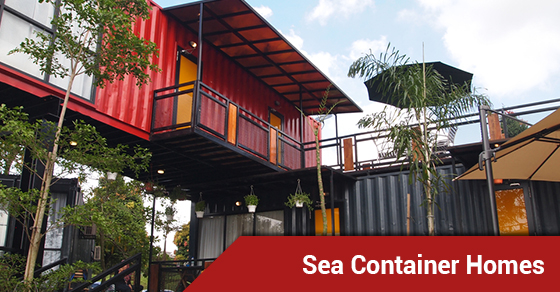 What’s the latest trend in real estate? Forget the skyrocketing costs of buying or building a brick-and-mortar home—think sea container homes! Inexpensive, flexible, durable, and carrying a cutting-edge vibe, these sea container houses are popping up all over the world—in less economically developed countries, as much as in those that pride themselves on being home to the world’s wealthiest 1 percent.

The appeal of sea container homes is actually easy to see. Done in an innovative and creative way, sea container homes are unique, remarkable, and fascinating to look at. Did you (or do you still) like playing with Lego? Well, the process here is quite similar, and just as absorbing and rewarding, although of course, on a much grander scale of complexity!

For those on a tight budget, the cost of creating a sea container home is a definite grabber. An average-sized sea container does very little damage to your wallet—you can get one for about $1500. These containers are flood- and fire-proof, which makes them solid home-building material. They come in various sizes—from 10 ft. to 40 ft.—which is handy for constructing multi-level modular buildings with varied structures.

Just take a look at these amazing sea container homes: 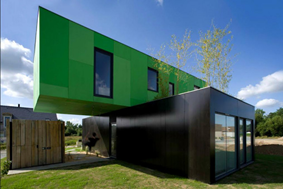 Known as the Crossbox House, this sea container home is located in Pont-Péan, France. It was built using two merged sea containers (at a criss-cross design, hence the name), to create three bedrooms, a large living room, a kitchen and two bathrooms. Total square footage: 1119. It is quite different from what you would imagine a house in the French countryside to look at, but very visually compelling, and still very much part of the landscape. 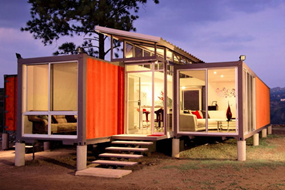 Total cost for this home? $40 000! Mortgage-free living at its best. It was built in San Jose, Costa Rica, using two 40 ft. sea containers to create a living space of 1,000 square feet. The ingenious element in this sea container home is the slanted roof, which lets the sunlight in and also allows the hot air to escape.

Canada’s golden west coast has taken a lead in the sea container home trend. This Victoria, B.C., home was the first one of its kind in Canada. And it’s not just a home—it’s a compound! The architect retrofitted eight 20 ft. cargo units with a roof, and created almost 2,000 square feet of modern living. It’s a marvel—the fact that the owner/architect sold it six years later for $728 000 speaks volumes. 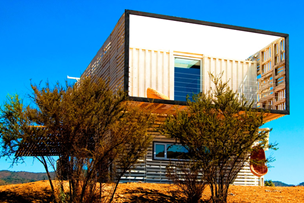 This sea container house in Curacavi, Chile, is a perfect example of how to deal with the somewhat unattractive exterior of Sea Can in a way that’s also practical. The architect used recycled wood pallets and shutters that not only cover the less-than-appealing sea container walls, but also to help to shade the home in the summer and warm up the metal walls in the winter. Three separate sea containers create an open living space of 525 sq. ft. 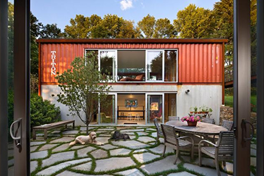 Talk about your suburban-looking sea container home! Doesn’t this one look like it belongs among other brick-and-mortar-white-picket-fence homes? This structure is actually located in central Jersey. The main building is comprised of six shipping containers, and another building is comprised of three. However, the complex houses a large living room, several bedrooms, a bathroom, a walk-in closet, and more.

The beauty of building a house with sea containers is that whether it’s a small cabin in a remote forest you have your heart set on, or a multi-levelled compound in a metropolitan city you desire, it’s all possible. The only limitation in this type of architecture may not necessarily be the budget—as sea containers are very affordable—it may just be just the builder’s imagination.