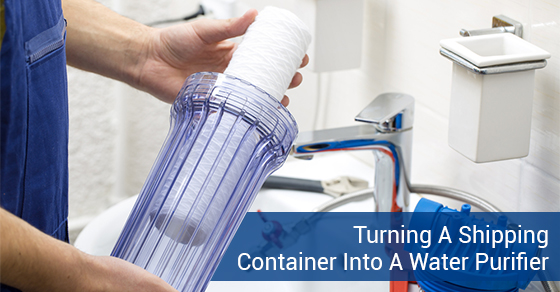 The shipping container module, dubbed Ekocenter, has been designed to provide marginalised and developing communities with not only the safe drinking water facility, but also solar powered charging, vaccination storage, and wireless internet technology.

A prototype of the first Ekocenter was being tested in Heidelberg, South Africa, before the transformation of an estimated 2,000 shipping containers.

The bright red shipping container has two sliding doors that lead to a shop counter. Behind it there are rows of first-aid supplies, canned food, cooking oil, and toilet paper. There are solar panels on the roof, wireless internet, and a television. There are also two taps that dispense purified water to everyone for free.

Inside the container is the Slingshot water purification device, which is about the size of a dorm fridge. It was developed by the famous mastermind behind the Segway transportation device, Kamen, who holds hundreds of patents, including for medical equipment inventions that have positively impacted countless lives.

The Slingshot has been in development for over 10 years, and uses a process known as vapour compression distillation to purify over 250,000 litres of water per year. This translated to around 850 litres (225 gallons) of clean drinking water per day, which is produced using less power than a hair dryer (1kWh). So, a single Ekocenter should quench the thirst of around 300 people.

In the Slingshot is a heat exchanger that heats and evaporates dirty input water at around 100 degrees Celsius. The steam is condensed and collected as safe drinking water, while the separated contaminants are collected on another end and discharged. Heat released from condensation is recycled into the boiling chamber.

The water purification system is so versatile it can work with any source of water, including seawater, sewage, and even chemical waste – regardless of the amount of dirt.

The Ekocenter initiative is targeting female entrepreneurs who will be in charge of everyday running of the facility. Besides the obvious benefit to communities without access to pure water, the project also seeks to impact and empower women.

The 2000 transformed shipping containers will be distributed throughout North America, Latin America, Asia, and Africa, producing an estimated 500 million litres of clean water per year. The Ekocenters will also act as central hubs for community activities, offering internet access, medicine and vaccine refrigeration, and charging services for lamps and mobile devices.